Dear Reader:Black on White crime is a term that refers to the disproportionately high number of  violent crimes committed by Blacks upon Whites in relation to similar crimes perpetrated by Whites upon Blacks. It is heinous phenomenon that has been growing in virulence over the past few years.

Black On White Crime Is Real!

One particularly vicious attack upon a lone White girl on a public transit train by a mob of Black adolescents that was recorded and uploaded to YouTube motivated a man by the name of Colin Flaherty to conduct an in-depth study on the subject of Black on White crime an publicize the results in a controversial book titled "White Girl Bleed A Lot" : The Return of Racial Violence to America.

In this groundbreaking expose you will find: detailed references to the government crime statistics that I mentioned earlier and other shocking revelations such as the conspiracy of silence within the mainstream media organizations to completely suppress or marginalize news stories involving Black on White crime violence and much more! 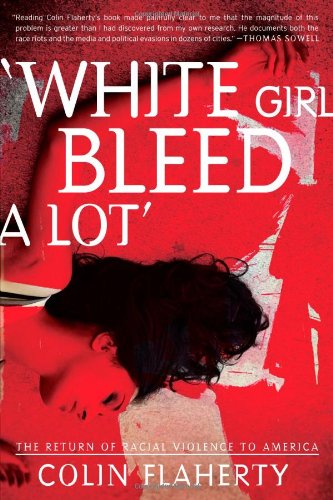 'White Girl Bleed A Lot': The Return of Racial Violence to America and How the Media Ignore It

Product Description:
Ferguson might be the worst, but it is not the first.  Ferguson is just the latest of hundreds of examples of Black on White violence around the country.

White Girl Bleed a Lot: The return of racial violence and how the media ignore it  was written for the deniers: Reporters and public officials and others who deny Black on White crime has reached epidemic levels.

That is why so many readers get another copy: They send it to someone who needs to read it.
Denial is not an option any more. Many of these cases are now on YouTube.
And for the first time,  readers will be able to scan QR codes to follow the Black on White crime video as they read about it in the book.

For the first time, readers will be able to see the huge difference between what big city newspapers say is happening. And what the videos show is really happening.

The new edition of White Girl Bleed a Lot documents more than 500 cases of Black on White crime in more than 100 cities around the country. Many in 2013. And how the local and national media ignore, excuse and even condone it.

Writing in National Review, Thomas Sowell said:  "Reading Colin Flaherty's book made painfully clear to me that the magnitude of this problem is greater than I had discovered from my own research. He documents both the race riots and the media and political evasions in dozens of cities.
Neal Boortz said: "ColinFlaherty has become Public Enemy No.1 to the leftist media because of the research he's done on the black culture of violence."

Or how a Chicago Police Chief blamed the violence on Sarah Palin and the Pilgrims. Or how Oprah Winfrey gave $1 million to a Philadelphia charter school, only to see its students on video assaulting a white person shortly thereafter.

Or how gays and Asians and women are particular targets.

And how one congressman and former mayor said his city should not crack down on the violence because that will "just make a lot of black kids angry."

And how newspaper editors and reporters say they will not report racial violence. And how some people fight back.

Anthony Cumia, of the Opie and Anthony Show  called White Girl Bleed a Lot a "Great Book." As did national talk show host Jesse Lee Peterson. The San Francisco Examiner gave it 5 Stars. More reviews at WhiteGirlBleedaLot.com
Alex Jones of Infowars.com said it was "Brilliant. I could not put it down."

Colin Flaherty has won more than 50 awards for journalism, many from the Society of Professional Journalists. His story about a black man unjustly convicted of trying to kill his wife girl friend resulted in his release from state prison and was featured on NPR, the Los Angeles Times and Court TV.

I wrote this book for the people who deny we are in the midst of an epidemic of racial violence.
There are lots of them out there: Reporters. Liberals. Police administrators. Editors. Mayors. Ten years ago, this would have been a he said/she said story. But no more. Today we have thousands of videos of black mob violence. In cities big and small.
Today, for the first time, you can follow these videos on your computer or your smart phone as your read the book. All you have to do is hit a link or scan the QR code.
Very easy.
This book offers no grand causes. No grand solutions. Neither does it apologize. It is written without racism. Without rancor. Just the facts: One after another. The violence. Then denial in the press.
Over and over and over.
Here is what I have learned from writing this book: Many, many people around the country are relieved that someone is telling the truth about racial violence. And doing it without racism.
Unless, of course, you think facts are racist. Don't laugh. Some do. Those folks need a copy of White Girl Bleed a Lot as well.
Lots and lots of copies of this book have been presented to liberal brothers-in-law at a family gathering with the admonition: "Read this, you blankety blank expletive deleted."
Lots and lots of cops read this book too. They are the sources for many of the stories.

Black On White Crime I Witnessed In NYC

In NYC during the late 1990s I witnessed a "slap attack". A group of Black teens (boys and girls aged 12-15) had just disembarked from the Staten Island Ferry. They ran down the exit ramp slapping White women on the head.

One Black girl who had just slapped a White woman was in close proximity to me so I grabbed her arm and I yelled out to the victim to notify the police. However the victim just scurried away. No one came to my assistance. So there I was holding the arm of this Black girl with no one to corroborate what occurred. I had no choice but to let her go lest I be arrested for assault or kidnapping.

I followed the gang up Broadway, as they left a trail of slapped White women in their wake, in hopes that I would see a police officer along the way and report what happened, but none were present. The gang eventually eluded me by catching a subway train.

As much as would have like to have inflicted serious bodily harm to any one of those pubescent bi-pedal predators,  I simply had to restrain myself because the moment I did so, I'm sure the cops would have come steaming out of the woodwork to arrest me. Furthermore there were no victims or witnesses who would corroborate the attacks. It was a frustrating no win situation for me.


Leave a Comment Below and Tell us What You Think...