by Len
in Blog, Current Events
Leave a comment 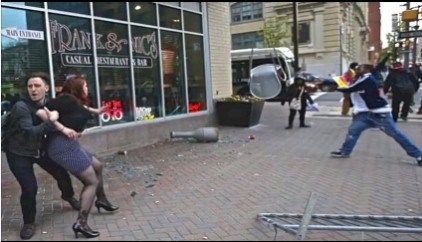 I did not intend to make the  horrific Baltimore riots, the topic of my second post on this blog. However, I  would feel remiss if I did not address them since they clearly demonstrate the need for self-defense training and security awareness.

So, the understanding that I have gathered from reading media reports of the Baltimore riots is that a man chose to run from police upon seeing them. Although they had no lawful cause to pursue him the police decided to chase him down and upon catching up with him they severely beat him. He ultimately ended up dieing from a spinal injury he sustained while in police custody under very suspicious circumstances.

As if that weren’t bad enough, large throngs of the urban populace decided to use that tragedy as an excuse to riot, pillage, destroy and inflict harm upon innocent bystanders who had noting to do with police action that triggered the mayhem. As I mentioned in the introductory article of this site, American society is disintegrating a rapid pace and the violent riots and other crime will occur with greater frequency.

It saddens me to see how helpless most of the victims were. Without knowledge of how to defend themselves they were easy prey for the rioters whose blood lust was excited by their victims’ weakness. I’m sure most of the the victims never gave self-defense training any serious consideration as they thought they would never need it. But as we can see from the Baltimore riot videos, “trouble” has a way of zeroing in on those who least expect it so it is best to be prepared!

I hope that this blog motivates  people to learn self-defense as quickly as possible. The foundation of anyone’s self-defense skill set should be use of the body the primary weapon. It is always with you and it cannot be banned or made illegal! Of course other weapons have their place but any weapon is really just an extension of the body. So one should learn how to use the body for self-defense first and foremost.

To Your Defense,
Len