Develop a Warrior Mindset for Self-Defense 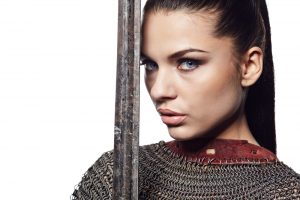 Animals have innate self-defense and self preservation instincts. We humans are animals too. Despite our superior intellect we actually have more in common with animals than most people would be comfortable admitting.  The  innate fight or flight instincts of animals is necessary for survival in  the harsh and brutal natural world where only the fittest survive according to the laws of nature. We created civilizations to shield ourselves from the harsh reality of nature.

In our civilizations there are strict laws of conduct to maintain relative peace, harmony and safety. People are generally optimistic, polite, helpful and charitable and believe in the good of their fellow man. Most think that tragedies only happen to "other" people. We are conditioned to trust law enforcement personnel to protect our societies from dangerous individuals who break the rules of conduct. Unfortunately, this has suppressed the natural fight or flight self-defense instincts of most people which makes them vulnerable to human predators.
I have read far to many new stories about crime victims who endangered themselves going to high risk places or interacting with high risk individuals. When interviewed by the police many of these victims said that they felt something was wrong, but ignored their feelings because they did not want to be rude or "politically incorrect". To make matters worse, they had no knowledge of self-defense nor the ability to protect themselves because they were paralyzed by fear. However, there is a very simple way to reactivate our inherent self-defense instincts.
It involves the visualization of loved ones in endanger. Protection of  people near and dear to our hearts, particularly children is a powerful motivating force. I have read stories, and perhaps you have too, of women who were able to unleash superhuman strength to free a child pinned under an automobile or some other heavy object after an accident. Similar behavior has been observed in animals.
Any animal will fight ferociously in defense of its' young and small normally docile animals have been known to repel predators much larger and stronger than themselves. This animalistic do or die ferocity can be harnessed by humans to quickly develop a warrior mindset for self-defense. When combined with the proper tactical training, practical and effective self-defense ability can be developed in weeks instead of years!
To Your Defense,